My TED TALK BASED ON BOLDER.

My BBC RADIO 4 ESSAY BASED ON BOLDER.

BOLDER WAS BBC RADIO 4 BOOK OF THE WEEK.

“A joyously life-enhancing book (that) shatters the myths about ageing.” (DAILY MAIL – MUST READ 2020)

“Informative…In dark times, Bolder is a book that really does look to the future with optimism.” (THE HERALD)

“A pick-you-up for anyone feeling the best of life has been lived.” (AUSTRALIAN FINANCIAL REVIEW)

“Honoré is a verbal magician, conjuring concepts with no new idea too complex to capture….Easy to read, the book canters along.” (AUSTRALIAN FINANCIAL REVIEW)

“Bolder makes some thought-provoking proposals…(it) is about age, but it is not a book for the old.” (LONDON TIMES)

“Honoré has so many examples of collaboration, grit and creativity that you won’t be so afraid when you come to inhabit your older self.” (THE BOOKSHELF)

“Carl challenges us to rethink our approach to aging and start seeing it as a privilege, rather than a punishment.” (GLOBAL NEWS)

“[O]ne of the lessons of Carl Honoré’s informative book is that ageism is steadily being rolled back, even if much of it is going on under the radar.” (THE GUARDIAN – Fiona Millar)

“For some age-old wisdom . . . Carl Honoré’s delightful book … shows how this ‘longevity revolution’ can be a boon, not a burden.” (CHATELAINE)

“[A] call for society to become less ageist and for individuals to stop worrying about the process of ageing and wring every drop out of whatever time is allotted to us.” (THE GUARDIAN – Stephen Moss)

“(Honore’s) stirring research and faith in the human spirit will linger long after one hears this exceptional audio.” (AUDIOFILE MAGAZINE – T.W. Winner of AudioFile Earphones Award 2019)

“Anyone who dreads the thought of ageing will find solace in this book, which is peppered with real-life stories from around the globe of the people Honoré interviewed.” (THE AUSTRALIAN)

“A sensation when he spoke about “slow living” for TED in 2005, Honoré has now turned his attention to the gap between an obsolete ageist culture – one that assumes “older” means “worse”, “weaker” and “out-of-touch” – with the reality he encountered in his research…Pack Bolder in your holiday holdall.” (BRITISH GQ)

“The very idea of growing older can evoke fear, angst, guilt, shame, scorn, even revulsion. We suspect that aging is all about becoming less: less attractive, productive, relevant, happy, creative – maybe even less ourselves. In this immensely readable book, Carl proves nothing could be further from the truth. The weaving of fascinating personal stories from a “Graffiti Granny” to couples who find love later in life mixed with lots of social science research had me nodding “yes!” instead of nodding off. There’s an energetic enthusiasm in this book that is representative of how Carl lives his life as a practicing hockey enthusiast and curious student of life. He helps remind us that “what will define you in the future, much more than your age, is the choices you make” and that aging is a universal phenomenon we can’t escape. He continues, “What can change is how we age and how we feel about it.” This book has a wide lens covering everything from our bodies to our role in the workplace to our image and romance to the joy of intergenerational connection.” (CHIP CONLEY, AUTHOR OF WISDOM AT WORK: THE MAKING OF A MODERN ELDER and FOUNDER OF THE MODERN ELDER ACADEMY)

VIDEO OF CARL TALKING ABOUT AGEING AND AGEISM

What inspired you to write the book?

I was at a hockey tournament, and playing well, when I suddenly discovered I was the oldest player there. The news shook me to the core. I began wondering if I looked out of place, if people were laughing at me, if I should take up a more gentle pastime, like Bingo. It got me thinking about how we often feel ashamed and afraid of growing older. How we imagine it’s all about loss, decline, decrepitude and sadness. I wanted to know if there was another, happier story to tell about ageing.

You betcha! What I discovered through my research is that many of our downbeat assumptions about ageing are wrong. And, here’s the really exciting bit: many things can actually get better as we grow older.

One thing that really blew me away is that people are generally more contented in later life. Across the world happiness seems to follow a U-shaped curve, bottoming out in middle age and then rising again thereafter. Even Pete Townshend confessed to feeling more cheerful in his 60s than he was when he wrote one of the most ageist lines in the pop music canon: ‘Hope I die before I get old.’ As we age, we become more comfortable in our own skin and less worried about what others think of us. We tend to form stronger, more fulfilling relationships. Ageing can also make us more altruistic.

The news is not nearly as bad as you think. These days we have more and more levers to pull (nutrition, technology, medicine, exercise) to slow the physical decline brought on be ageing, which means we can go on doing amazing things with our bodies deep into later life. That is why the media is packed with stories about people kitesurfing in their fifties, climbing mountains in their sixties, running marathons in their seventies, cycling long distance in their eighties and swimming competitively in their nineties. Today, the average over-65-year-old is in better shape than ever before.

Without doubt dementia is the darkest cloud hanging over later life.Not only is there no cure but we do not even know why it strikes in the first place. Nevertheless, the picture is not as apocalyptic as the headlines proclaim. Around 17 per cent of people over the age of 80 have dementia, but that means the other 83 per cent do not. And researchers are confident that we’re on the road to making breakthroughs in both treatment and prevention.

On the contrary. Older people are smashing it in the start-up world. A recent study of all new businesses launched in the USA came to the following conclusion: “We find no evidence to suggest that founders in their 20s are especially likely to succeed. Rather, all evidence points to founders being especially successful when starting businesses in middle age or beyond.” Bottom line: there is no such thing as the ‘wrong’ side of 40.

Because the world is changing in ways that herald a golden age of ageing. More jobs rely on the social acumen that improves with age. Every day, medics are getting better at managing the diseases and decline that come in later life. Every year there are more older people on the planet – and there is strength in numbers. It is harder to dismiss or denigrate a growing chunk of the population, especially when so many of them are taking life by the scruff of the neck.

That they can change over time. Human beings may be hardwired to admire young bodies and recoil from anything that portends death, but beyond that, how we feel about growing older is shaped by culture – and culture evolves. In 17th- and 18th- century Europe, for instance, young men actually tried to look older by wearing powdered wigs and clothes tailored to give the impression of ageing bodies. If we embraced the cult of youth in the 1960s, then we can choose to un-embrace it now.

Yes, profoundly. It has made me feel so much more at ease with the idea of growing older. Like anyone else, I still worry about what the passage of time will do to my health, my finances, my looks, my loved ones. Nor do I want my life to end. But such worries feel less daunting now because I know that, with a little luck and the right attitude, lots of good stuff awaits me in the coming years. Best of all, I no longer feel ashamed to play hockey (or any sport) with people half my age!

To see ageing in a completely new light. To move from fear and dread to the kind of understanding and optimism that will help them make the most of their lives – at every age. The real challenge facing us is not ageing; it’s ageism. My first three books took down the canard that faster is always better. BOLDER is about shooting down the myth that younger is always better. I also hope to spark a wider public debate about attitudes to ageing. If all of us are going to have an equal chance of ageing better then we need to rewrite the rules of everything, from the workplace and education to design and social services. 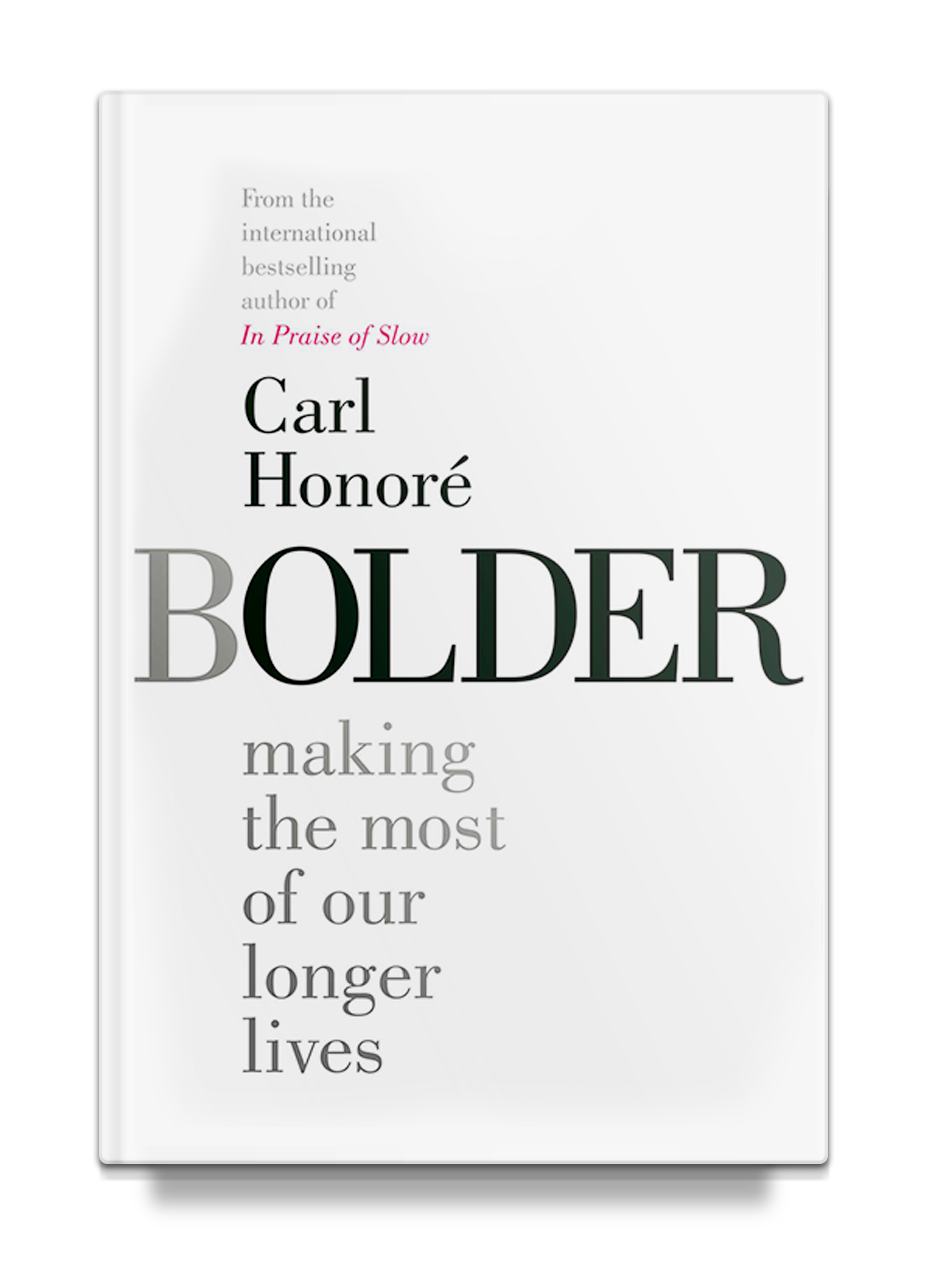